Since putting the brakes on Retrobok back in May last year it’s been interesting to take a look at how my own tastes have changed after having been focused on a single brand for so long.

Yes I’ve been really enjoying other brands (gasps at the back), no I’ve not been much excited by much of the output since calling it a day. Yes I’ve been thinning out my Reebok collection (although this is primarily due to living in Tokyo where space is a luxury), and finally no Retrobok isn’t going to restart any time soon.

Yet the curious thing is which of the Classics I’ve gone back to, which I want to seek out fresh deadstock pairs of, and which have felt even more relevant since their release with the fast pace of sneaker fashion as it is.

Hit that jump to read more.

While not in my current rotation – both of my Club C’s are pretty beaten up now – the OG design of the Club C works so damn well. They should be a staple shoe in any Retro ‘Bok or Tennis aficionados wardrobe. Simple, elegant, terrycloth-lined, perfect for summer yet (in the leather makeups) tough as nails even if it’s not summer.

Sharp intake of breath anyone? We’re barely into this listicle and I’m verging into dangerous territory. Are these true Retroboks? Really? Hmm, well let’s say 50/50, but with their Pump Fury DNA, modern detailing and an incredible wear experience (slip on, quick tighten with those bungie laces, slip off, easy…) they deserve a place in any Reebok lovers wardrobe for urban casual wear. My Dark Sage/Neon Cherry pair shown above could be considered one of the OG colourways – and there have been many since, demonstrating the huge sales success that Reebok have had with the Lites.

I wondered why I kept going back to these – but simply because they’re that perfect balance of retro Reebok look, stability, refinement, and in a neutral colourway that is flexible with most outfits.

As the forerunner (ha) of the legendary Pump Fury, and with tales of Reebok blocking in the outer midsole bridge (above in Orange) to conceal their tech from the competition, I’ve grown more and more fond of this 90’s retro since picking them up back in 2014.

Shoes from a golden era of Reebok – within my own collection these are some of the closest to ‘true’ Retroboks (aside from the GL’s and LX’s – more on those later) and most of the WB colourways are totally on point screaming ‘early-to-mid 80’s Reebok‘. The only small downside is that all my own retro pairs fit rather narrow, and stability is a little lacking, yet all is proof of their Running DNA. Quick fact – OG’s don’t include the arc’d WORLD BEST stitching on the heel wrap.

A beautifully elegant shoe that would surprise anyone that they’re even Reeboks. Butter-soft leather, debossed detailing and that rather unique olive midsole, these have been a regular wear since the day I received them. Lush. 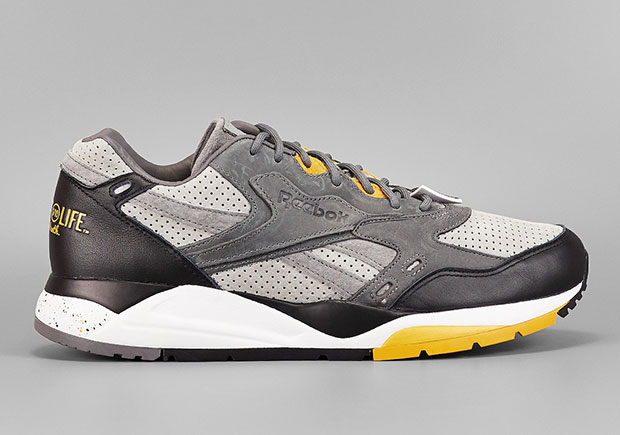 I honestly don’t think photos do this shoe justice. On the TDL collab shown above, the details are incredible, the materials high-grade, and the 1990s Bolton midsole blocking adding a touch of modernity to something quintessentially retro. Favourites me are what I term ‘Italian dress sneakers’; a pair of smart sneakers that can be worn comfortably with semi-formal clothing and work. The TDL Bolton (and some of the monotone colourways Reebok released) do just that.

Garbstore were one of Reebok Classics’ finest collaborators in my opinion, running their ‘outside in’ theme across a pretty large number of Ventilators, Ventilator 2’s, Supremes, World Bests as well as others from the ‘Franchise 5’.

The pair shown above are just insane in real life – a blend of creams, greys and whites with a rare otherwordliness that should make your stock Jordan wearer feel downright ashamed.

With the bulky sneaker resurgence over the last few years, the chunky silhouette of the Supreme makes more sense than ever – and in an unbranded form as seen on the Garbstores – they are a pair I want to replace.

To say I’m proud of having had a direct influence on a pair of sneakers is a bit of an understatement. But it can take geeky retroheads like me to spot the logo details on the OG’s that needed a little correction, and I’m stoked the Classics team noticed.